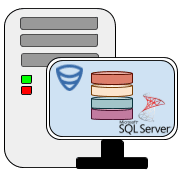 Below we want to discuss the three main ways of how to backup SQL Server 2016. Everyone who works with SQL Server knows that creating backups according to your schedule is crucial for keeping your SQL Server 2016 database safe and sound. So, let’s start:

The simplest way to backup SQL Server 2016 is to use a third-party tool, such as SqlBak. This is a simple service that backups SQL Server 2016 according to your backup plan. All you need is to spend a few minutes and create a backup job, and SqlBak will make all the work for you. Please note that all standard T-SQL Commands to backup your SQL Server databases apply in SqlBak.

If you want to know a way of how to backup SQL Server 2016 with the help of SSMS, then check out the following steps:

The Query Store feature keeps records of previous query execution plans with their performance data, and quickly detects queries that have gotten slower recently, enabling users to force the use of an older, better plan, if necessary.

Use brand new hybrid feature “Stretch Database” from Microsoft to minimize your storage. The basics of Stretch Database are that some portion of your tables will be transferred to Azure SQL Database in the cloud. When you send a query to such tables, the query optimizer knows which rows are on your server and which one rows are in Azure, and separates the workload appropriately.

SQL Server 2016 has introduced row-level security (RLS), a feature that different databases have had for quite a few years. This limits which users may observe what data in a table, based on a function.

Always Encrypted is a brand-new service through the use of an enhanced client library at the application so the data stays encrypted in transit, at rest, and while it is alive in the database.