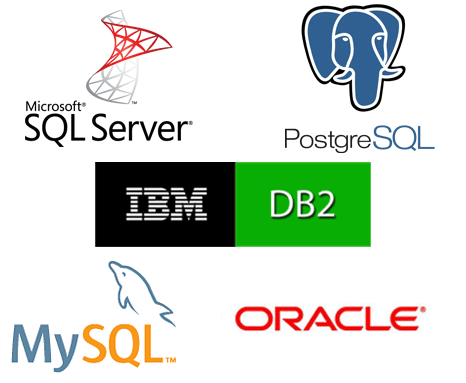 There are a lot of SQL companies out in the world which build relational database systems to take care of storing and managing your data.

Here are some of the established SQL companies and their products.

The first item in our list of SQL companies is Microsoft and its flagship relational database system called SQL Server.

Multiple editions of SQL Server are offered by Microsoft, which are aimed at different types of customers, for situations that require high performance in the case of high workloads both on small machines or large clusters. Like all big companies, SQL Server runs with its own dialect of SQL, T-SQL.

Oracle started in 1979 with the first commercial RDBMS. The company offers powerful, but complex solutions for your database system, but these solutions are used in companies from the Fortune 500 list.

The platform supports very large databases, which are beneficial for multinationals. High availability is also one of Oracle’s great features.

Unfortunately, Oracle’s cost and high memory requirements doesn’t make it the first pick for companies. Like SQL Server, Oracle has its own dialect of SQL used for its databases, PL/SQL.

MySQL is the world’s most popular database system and the most known in our list of SQL companies because it’s open-source and used by almost all of the starting companies.

It has great speed, reliability and is easy to use which makes it one of the most common platforms for Web applications, SaaS services, and others.

Many worldwide companies which are still growing use MySQL to save time and money while powering their applications and businesses. To name some: Youtube, Facebook.

MySQL’s top version is MySQL Enterprise, a full set of production tools for monitoring and data management, along with a premium support service.

PostgreSQL is another item in our list of SQL companies. PostgreSQL is the most advanced open-source database system in the world. It powers online gaming applications, data center suites, and world-tier companies such as Yahoo! and Skype.

It runs on the most common Linux distributions (including Mac OS) and Windows platforms. It’s compliant with ACID and supports database objects and data types that can be found in SQL Server.

It has support for storing binary objects like images, video, etc. and it has native interfaces for many programming languages: C/C++, Java, Python.

DB2 is IBM’s database server solution for the enterprise. All programs in IBM’s suite support data under the relational model and recently there has been added support for object-relational and non-relational structures like XML.

IBM’s DB2 has a “common server” codebase which will make it run on multiple platforms and it supports multiple features which increase performance like table partitioning, multidimensional clustering, and workload management to give you low overhead and fine control over the environment.