“Transaction was deadlocked” error occurs when two or more sessions are waiting to get a lock on a resource which has already locked by another session in the same blocking chain.  As a result, none of the sessions can be completed and SQL Server has to intervene to solve this problem. It gets rid of the deadlock by automatically choosing one of the sessions as a victim and kills it allowing the other session to continue. In such case, the client receives the following error message:

and the killed session is rolled back. As a rule, the victim is the session that requires the least amount of overhead to rollback.

To understand how “Transaction (Process ID) was deadlocked on lock resources with another process and has been chosen as the deadlock victim. Rerun the transaction” error happens let’s consider a very simple example.

and fill them with some data:

Now, suppose we started a transaction that deletes rows with id=2 from t1:

Then, assume that the other transaction is going to delete the same rows from both tables:

It needs to be waiting for the first transaction to complete and release table t1.

But, assume that the first transaction now deletes the same row from the second table:

After executing this statement you should receive the following error message:

How to Analyze Deadlock Graphs

A deadlock graph is a block of information showing what resources and sessions are involved in a deadlock. It helps to understand why the deadlock happened.

Before SQL Servers 2008, in order to capture this information you had to set up a server-side tracing or enable trace flags and then wait while the deadlock occurs. Starting from SQL Server 2008 everything is much easier. You can retrieve a deadlock graphs retrospectively from the extended events “system_health” session. To do this, go to “Management” > “Extended Events” > “Sessions” > “system_health” > “package0.event_file” and click “View Target Data…” 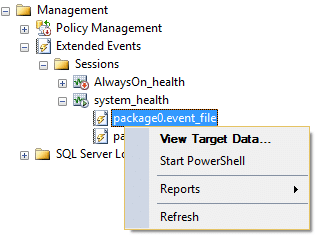 Thousands of events will be shown in the opened window. There you can find deadlock reports which marked as “xml_deadlock_report”. Let’s choose one we’ve just simulated 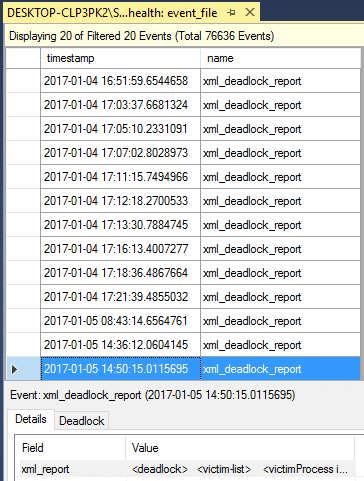 and look at its deadlock graph (in form of XML) details consisting of resources and processes sections.

Resources section displays the lists with all the resources which were involved in the deadlock:

It shows what processes were fighting over and what types of locks they were causing. It has two or more entries. Each entry has a description of the resource followed by the lists of the processes that held a lock or requested a lock on that resource. Locks in that section mainly will relate to a key, RID, a page or a table.

This section contains entries about the threads involved in the deadlock and provides such crucial information like host names, login names, isolation level, times, session settings and so on. But the most valuable information is the isolation level under which each query was running and the details about statement caused the deadlock.

How to Choose a Deadlock Victim

If you can’t avoid deadlocks, there is an option to specify which process should die when a deadlock occurs. SQL Server chooses a deadlock victim based on two factors: DEADLOCK_PRIORITY set for each session and the amount of work which SQL Server has to do in order to roll back the transaction.

The DEADLOCK_PRIORITY option can be set by a user to HIGH, NORMAL, LOW or to an integer value from -10 to 10. By default, DEADLOCK_PRIORITY is set to NORMAL (0). Use the following syntax to set deadlock priority:

LOW is equal to -5, NORMAL is the same as o, HIGH equals to 5. In other words, run the following commands to set a deadlock priority to NORMAL:

To check the deadlock priority of the session you can use the following query:

How to Avoid Deadlocks in SQL Server

As a developer, you need to design database modules in a way that minimizes risks of deadlocks. Here are some useful tips on how to do that:

These two applications may deadlock frequently. If both are about to execute step 3, they may each end up blocked by the other, because they both need access to an object that the other application locked in step 2 and was not to release it till the end of the transaction.

Please see the following correction of the above example, changing the order of the statements (good practice):

It is a very good idea to define some programming policy that defines the order in which database objects and resources have to be accessed by the applications (also it is a good policy to release locks in the opposite order to that in which the applications locked them).

Please consider the previous example:
the applications have two statements in a transaction (bad example)

Please consider the following changes in the above example  (good example):

In this case you have everywhere one update at a time, thе transactions are very short, and there will be no deadlocks here at all.

Make sure the applications use the minimum necessary transaction isolation level.

For example, when the lowest isolation level possible (READ UNCOMMITTED) is used, there are no deadlocks at all. Although in this case you have to take special care of data integrity,
as READ UNCOMMITTED isolation level allows a transaction to read a table before another transaction finishes writing to the table (i.e. before the writing commits), and in this situation some data can be read before an update finishes, so you have to be careful about reading possibly outdated or inconsistent data.

Use “manual” lock/unlock possibilities to lock/unlock objects by yourself, not leaving it to the system, i.e. not using high level transaction isolation levels

Here the situation is prone to deadlocks, but if all of the ‘update’ statements are wrapped up with special lock/unlock procedures, then there will be no deadlocks.

To implement ‘Manual Lock’ use  sp_getapplock procedure.
For ‘Manual Release’ usesp_releaseapplock procedure.
In the example above there will be no deadlocks (and no ‘lost updates’ etc) even using the lowest transaction isolation level, as each transaction do not ask for access to another object before releasing the previous one.

In case Repeatable read or Serializable isolation levels are required, and two applications use the same database object very frequently, use UPDLOCK hint

Here are the two transactions just checking some data up before changing them
(e.g. counting a number of records of a table before inserting a new record in it).

On step 2 both transactions apply S-lock to the same database object and then on step 3 they both wait for release of the S-locks for changing something in the structure of the object (e.g. inserting a row to the table).

Please see the changes in the two transactions (good practice):

The advice is to start all relevant transactions with SELECT statement with UPDLOCK optimizer hint for making the two applications to deal with the same database object one after another in turn:

Other advices on how to avoid deadlocks in SQL Server

There are also other general advices related to the matter, such as

open all | close all